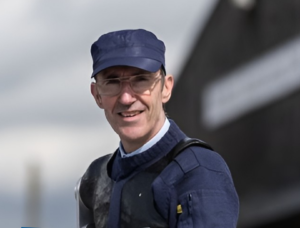 Award-winning motivational speaker Steven Robinson believes that everyone is capable of achieving more than they believe is possible. After watching his Big Friday Finish, it’s hard not to agree with this sentiment!

Steven’s story starts in a slum housing estate, Buggy Park, in Leeds. Every house on the estate was infested with bugs, cockroaches and silverfish. In the 60’s the estate was razed to the ground and the area incinerated to remove the bug infestation. Steven’s family were extremely poor and his Father was violent towards his Mother. When Steven was four, she left his Father to ensure the children didn’t grow up in a household where violence was normalised.

Although the family was now away from the violence unfortunately for Steven his schooling years were rife with bullying. He was bullied at primary school for coming from a single parent household, at middle school for receiving free school lunches and at high school for having acne. As a result he hated school and only went in two out of five days a week. On one of his days out of school a friend let him ride his motorbike. Steven absolutely loved it and his friend offered to sell it to him for £10. Steven wanted the bike so much that he sold his Instamatic camera and washed cars and gardened for people, even though he hated doing both. Finally he had the £10 he needed to buy the bike.

Steven was now a 13 year old in the possession of a motorbike. He soon met a 12 year old who also had a bike and together they had great fun doing tricks and riding together. There was also a 30-year-old who wanted to join them but they soon realised that he wasn’t as capable so they avoided him like the plague.

The 19th April 1982 was the date that Steven could no longer avoid the third bike rider. Unbeknownst to him the man had decided to execute a daredevil stunt over a blind jump, with Steven underneath unaware of what he was about to do. Unsurprisingly he didn’t have the skills required to pull off the stunt, instead landing on top of Steven. The bike’s foot peg ripped off Steven’s arm, the bike fell onto his chest collapsing and puncturing both his lungs, ruptured his spleen, gall bladder and liver, fractured his pelvis and broke his leg.

After waking in the ward Steven experienced phantom limb syndrome – the sensation of feeling a missing limb is still attached to you. Steven realised that this is no different from the phantom barriers that stop people achieving what they want to do. The first step to conquering them is to recognise that they’re there.

It soon dawned on Steven that any job opportunities he may have had were now gone. He didn’t, however, view this as a bad thing. Instead, he felt as though all constraints had been lifted and he could do what he liked, maybe even earn some money on the way!

From Break Dancer to Jukebox Creator

Once out of hospital Steven embarked on his plan to do what he wanted to do. He became a one-armed mechanic, then a break-dancer and then bought and restored vintage jukeboxes and one-armed bandits around the world, meeting millionaires and celebrities.

He soon realised that he needed further education, having left school with no qualifications and so enrolled in night school, studying everything from computer programming to woodwork until he exhausted all the courses on offer.

Having left night school he enrolled at Leeds Metropolitan University and earned a 1st class honours degree in Computer Science. He was the first in his family to attend university and didn’t start until he was 35, graduating when he was 40. As Steven puts it:

You are never to late to educate

For his final year project Steven created a piece of software for a digital touch screen MP3 jukebox. Using the skills learnt from his night school courses he went one step further creating the hardware to software interfacing. On leaving university he launched his own jukebox company. In the first eight months he sold 400 jukeboxes, creating a million pound product. He called his jukebox the silverfish, a nod to his childhood in Buggy Park.

Everyone wanted his jukebox, unfortunately some wanted his jukebox without wanting to pay for them. A multinational amusement machine manufacturer got hold of one of his jukeboxes and copied it, circumventing the security system which de-stabilised the software and used inferior electronics to create a sub-standard version. This not only damaged his reputation but also priced him out of the market with a version of his own machine. Steven felt he had no option but to sue for copyright infringement.

Six years of litigation ensued. Steven had to put bars up at his house to protect him from the death threats he was receiving daily. But he’d been bullied before, and he wasn’t going to stand down.

One of the topics Steven discussed was how to recognise and overcome phantom fears. Steven was terrified of horses after an incident as a child. He decided to tackle his fear head on by taking riding lessons. In 2014 he came 5th in the National Dressage Qualifiers, and, only two weeks ago he came 3rd! He’s managed to turn what was once a fear into a passion.

His other fear was of flying. In order to get on a flight he would need to have weeks of therapy prior to boarding. One day, whilst scrolling through social media he saw an advert for a flying scholarship for disabled people. He decided to apply and got the scholarship.

In order to to learn to fly he needed to get a prosthetic arm made. When attempting manoeuvers in the plane the arm fell of five times. His instructor told him to keep trying, pointing out there was 3,500ft below them and therefore plenty of time to correct any errors before impact. As he said; the most useless bit of sky is that above you, and the most useless bit of runway is the bit behind you.

This struck a chord with Steven, it’s a great metaphor for life: it doesn’t matter what’s in your past, only what’s in front of you and in your future.

Despite all their attempts it soon became clear the prosthetic arm wasn’t going to work. Steven had to wait for a new version to be built for him. 12 months later it arrived…..and it also didn’t work! Undeterred Steven put his skills to work and built his own prosthetic arm so that he could complete the training. Steven is now a fully qualified private pilot and has been awarded the Douglas Bader memorial trophy for his outstanding contribution to disabled pilots.

So, how did Steven overcome his fears? He used a proven psychotherapy methodology known as exposure therapy. If you’re afraid of doing something then gradually start doing it, bit-by-bit until you’re no longer afraid of it.

Steven Robinson is an extraordinary man, having come from humble beginnings, suffering catastrophic injuries and turning them into massive positives, he’s never stopped moving forward regardless of what life has thrown at him and taking opportunities when they have arisen, as he explains:

Opportunities are everywhere. What will happen if you don’t take them? Nothing. So why not take them, enjoy the journey and see where you end up.

His last piece of wisdom was: If you don’t ask, you don’t get because no one knows you want it in the first place. How many times have you missed out on something because you didn’t ask? So, your challenge is to go and ask somebody for something, who knows what opportunities it may open for you!